With Lawrence Parks and Recreation Department’s ongoing effort to reduce the number of pesticides and herbicides used in park areas, the department will call upon goats to assist with removing honeysuckle in Prairie Park.

Approximately 50 goats from Goats On The Go®  have been deployed to an area of Prairie Park to graze the honeysuckle that has overtaken the area.

Honeysuckle is an invasive plant that has a tendency to spread out of control and takes over the growth of an area. Invasive plants are not indigenous to an area.  Many times invasive plants become so widespread that they crowd out and discourage growth of other plant species, especially natives.

Goats are known for having a palate like humans. They avoid foliage having a bitter taste and prefer vegetation that produces berries and things that are sweet like honeysuckle. Also, goats are able to adjust to rough terrain and go to areas that are hard to access.

It is estimated the goats will eradicate the low-growing honeysuckle in the area of Prairie Park within a few days. At that point, the goats will be removed and park staff will cut down any remaining tall, invasive plants. After a period of six to eight weeks, the goat will be brought back to feed on the cut foliage and any re-sprouting honeysuckle.

Guy and Beth Masters, owners of the goats, will install temporary fencing around the area being grazed. Park staff will have a secondary barrier, preventing access to the area by the public.

Goats On The Go® have been used by other cities to assist with removing invasive plants. In the area, the City of Edwardsville, Kan., has contracted with the company to assist with the removal of unwanted vegetation. 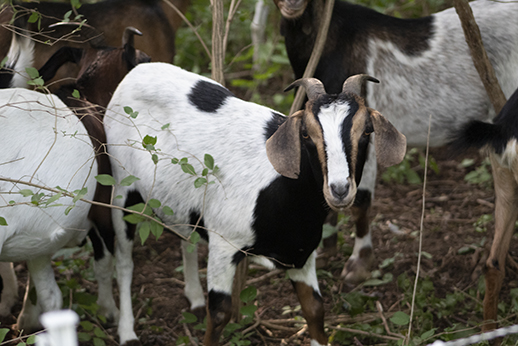