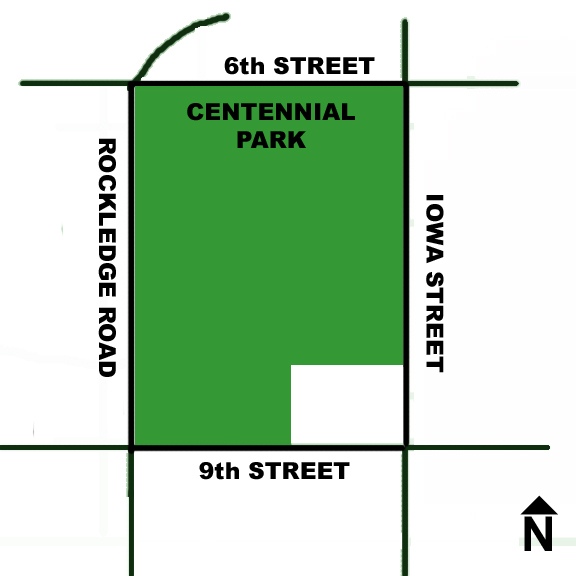 HISTORY
People in and around Lawrence have been coming to Centennial Park for many years to take advantage of the natural scenery and spacious facilities. Whether they are playing with their children at the playground, getting in a round of disc golf, or simply taking a walk, these people are fortunate to have a park with a vast and storied history such as Centennial’s. The following paragraphs contain a brief description of that history.

Sediments from large inland seas of 300 million years ago and erosion during the ice ages both contributed to the most prominent features found in Centennial Park today. Among these features are terraced cliffs carved out of limestone, rolling slopes and a waterway draining North to what is now the Kansas River.

By the time the settlers entered the area in the early 1800s, the hills were covered with tall grasses and wildflowers, and hardwood trees dotted the landscape. The settlers made their way West by way of the Oregon Trail that ran along what is now Rockledge Road on the West side of Centennial Park. The land where the park is currently found, being too hilly and rocky to produce crops efficiently, was most likely used for grazing of livestock.

The property passed through a series of landowners in the early 1900s, among whom were a professional boxer, Jes Willard, and Kansas City investors E. Kemper Carter and his wife Anna Currie Carter. After World War II, land was rapidly snatched up for housing developments. Ownership of the property finally found its way to a corporation formed to acquire the land to set it aside for a park and to celebrate the City’s centennial in 1954. Lawrence school children raised the funds to purchase the land that was acquired for substantially less than its actual value. The corporation then sold the land to the City of Lawrence for $1 on the condition that the property be eternally preserved as a public park.

Many features and additions have since been constructed to contribute to Centennial Park’s present day appearance. A missile and fighter plane (which has since been removed) were constructed during the Cold War. Also added were three picnic shelters, a children’s recreation area, tennis courts and a disc golf course. The most recent addition is the construction of a skate park to replace the tennis courts.

DESCRIPTION OF PARK
Located between 6th and 9th Streets; Iowa Street and Rockledge Road, this 35-acre park today is one of the most centrally located parks in Lawrence. The amenities of the park include:

Centennial Park displays a Polaris missile that was constructed during the Cold War.

With its rich history and amenities, it continues to be a popular destination for families and individuals and is one of the most beloved parks in the City.

SHELTERS
There are two shelters located in Centennial Park.

The east side shelter can accommodate 140 to 150 people. Its amenities include:

The west side octagon-shaped shelter/gazebo can accommodate 40 people. Its amenities include: