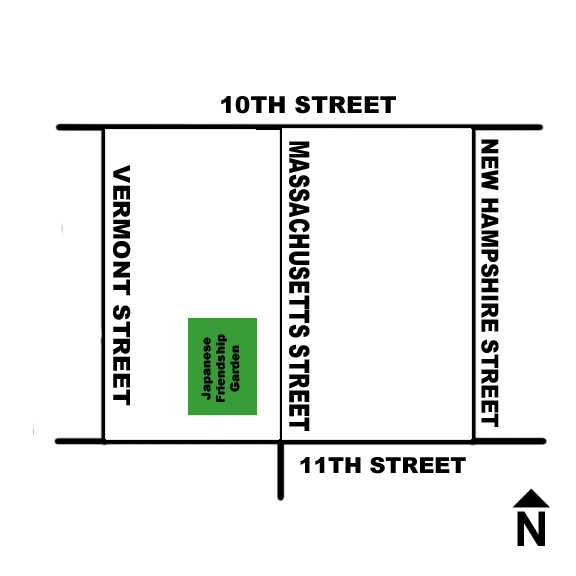 HISTORY
The Japanese Friendship Garden was built to honor the 10 year anniversary of Lawrence’s relationship with its sister city, Hiratsuka, Japan. In 1995, the City of Hiratsuka, presented a gift of $5,000 to the City of Lawrence in recognition of their five year anniversary as being sister cities. The City of Lawrence matched the funding amount, and Faye Watson and many others volunteered their time to help create the friendship garden. Over $15,000 of additional funds were raised by volunteers who organized a fund raiser called the “Sister City Garden Gala.”

Approximately 50 delegates from Hiratsuka, including Mayor Itsuo Yoshino and nine other city officials, traveled to Lawrence to attend the dedication ceremony, which was held on October 26, 2000.

The Japanese Friendship Garden represents the cultural ties with Hiratsuka and Lawrence. It is located in Downtown Lawrence, on the north side of Watkins Community Museum at 1045 Massachusetts Street.

SHELTERS
There are no shelters located in the Japanese Friendship Garden.

See our shelter rentals page
for more information on renting these facilities or call (785) 832-7920.