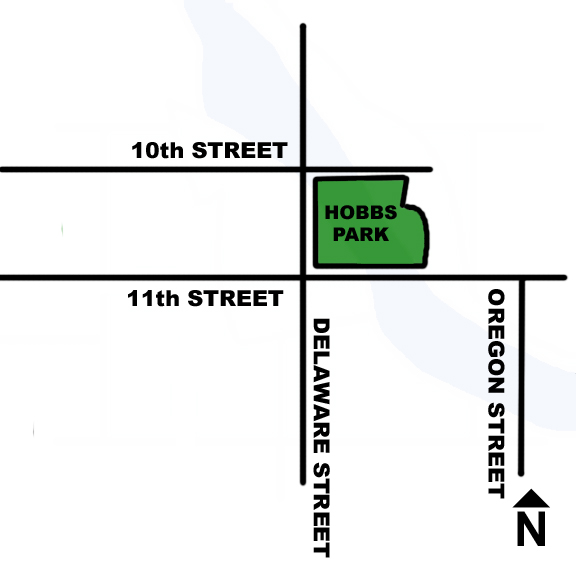 HISTORY
The late Myra B. Hobbs, a resident of Lawrence, left in her will approximately $70,000 to the City of Lawrence. The money was to be used specifically to purchase land for the purpose of creating a city park.

In her will, Mrs. Hobbs directed the City of Lawrence to purchase land existing “east of Massachusetts Street at a location between 6th Street and 15th Street.” She also expressed the park should be named to honor her late husband, Earl Hobbs.

Hobbs Park lies where a City garage (a Quonset hut) once stood at 10th and Delaware Sts. The Quonset hut was converted into a neighborhood recreation center; until it was torn down to make park renovations from the bequest of Myra Hobbs.

The hut served as a neighborhood center until East Lawrence Recreation Center in Edgewood Park was constructed in the mid-70s.

Also included in the park is Municipal Stadium.

DESCRIPTION OF PARK
Hobbs Park is home to a softball field, also known as Municipal Stadium. In addition, a playground area is available for children, along with a picnic shelter and basketball court.

The Murphy-Bromelsick house, also known as the John Speer Farmstead Site, is located in Hobbs Park.

The amenities of the park include:

SHELTERS
There is one shelter located in Hobbs Park.

The amenities of the shelter include: