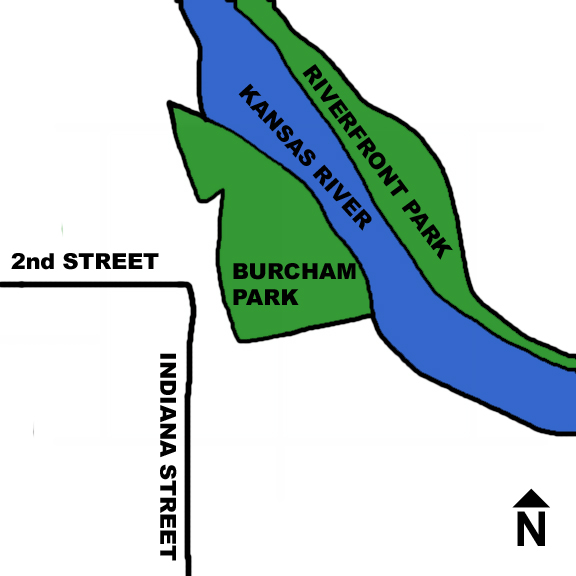 HISTORY
Lawrence city planning and help from the U.S. Army Corps of Engineers led to the development of these 994 acres along the Kansas River. Located at the intersection of N. Second Street and Highways 24 and 40, Riverfront Park began in 1984 as a restoration and re-vegetation project. Two grants from the Kansas Wildlife and Parks Non-Game Wildlife funds and City of Lawrence tax dollars funded the project.

Formerly used for landfill operations, the site now continues to improve as a wildlife habitat that supports a variety of species. Landfill operations at this site (1970-1981) deposited an estimated 481,000 tons of municipal solid waste on approximately 100 acres of the area. The restoration project was designed to create a high quality habitat that will support a large variety of wildlife species. Although primarily designed for wildlife, this area also offers diverse recreational opportunities, including bird watching, hiking and photography.

The Kansas Fish and Game Commission completed a public boat ramp in 1979 at 8th and Oak streets. Two other one-lane boat ramps (one near Highway Junction 24, 40 and 59, and the other near the Mud Creek mouth at the Kansas River,) 10 miles of bike and hike trails on the levee top, picnic areas, river overlook areas and vault toilets were completed in 1981. The vault toilets were removed in the mid-2000s.

No hunting, fire-arms, camping or off-road vehicles are permitted in this city-owned wildlife area.

Riverfront Park sits alongside the Kansas River. The park’s entrance boasts rows of limestone boulders that line the road descending to the park. The Lawrence Parks and Recreation park department move each individual boulder by hand, spacing them apart to create an aesthetically-pleasing park entrance.

Native Grasses
The park hosts approximately 120 acres of native grasses, including big bluestem, little bluestem, Indian grass, switch grass, sideoats grama and western wheatgrass. These grasses provide an excellent nesting and winter cover for wildlife, and the grass seeds and foliage are a valuable food source for nearby quail and other species. The city also planted a variety of trees and shrubs in the area to supply cover and habitat diversity. Their berries and nuts also serve as an excellent source for food.

Wildlife
Riverfront Park is a prominent nesting site for bluebirds, wood ducks, purple martins and other species of birds. Parks and Recreation installed houses, tubs and other artificial structures to help alleviate the natural shortage of nesting sites. The department routinely cleans and maintains the structures each year, restoring them with fresh nesting material like wood shavings and cedar wood chips. However, bluebirds and purple martins gather materials to build their own nests.

In 1986, the City released 40 Canada geese at the area with hopes of establishing a resident flock. The geese spend the day feeding on neighboring grain fields or pastures and return to the area at night to roost. They may fly south for several months of the year during the winter in search of warmer weather.

Disc Golf
In September 2005, Parks and Recreation installed an 18-hole disc golf course making it the City’s second course. Although Riverfront Park’s course is shorter than the other disc golf site in Centennial Park, users consider it to be more challenging because many of the holes navigate throughout wooded sections of the park. The disc golf course is accessible from the park entrance and is a popular place for disc golfers.

Off-Leash Dog Park
The area is also home to the City’s second off-leash dog park, which opened in May 2005. Parks and Recreation developed the dog park in response to public requests for additional off-leash areas in the City’s park system. Dog owners can enjoy an afternoon in the shade with their favorite pooch.

The amenities of the park include: