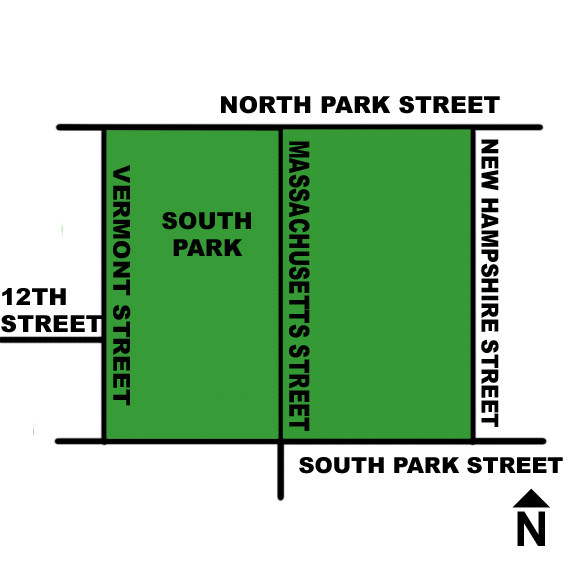 On August 31, 1910, a crowd of 6,000 citizens and visitors attended a formal dedication of the Roosevelt Fountain, the granite display fountain. President Theodore Roosevelt was present at the ceremony, arriving by train at the Santa Fe station in Lawrence. The fountain was originally located at the intersection of New Hampshire and Warren (now Ninth) Streets, because of its proximity to a livery stable.

However, with increasing automobile traffic, the fountain’s location soon became unpopular after many dented fenders. The fountain was moved to Robinson Park in 1929, just west of present-day City Hall, with the promise of protection.

In 1965, the Lawrence Flower Club members, celebrating their 40th year, petitioned the city commission and parks department to move the forgotten fountain to a site in South Park. Later, a rose garden was created in South Park by Robert Rankin.

The fountain needed cleaning and restoration by 1982, and, once again with the request of the Lawrence Flower Club, the fountain was restored.

East of Massachusetts Street features the William Kelly Bandstand, which is a popular place for special events, weddings, parties, and the home of the Lawrence City Band’s Summer Concert series. This side of the park also includes the Roosevelt fountain, picnic areas and flower gardens. Trees line the walkways throughout the park, and benches offer relaxation and tranquil areas for visitors.

The West side of the park is full of playground equipment, swings and slides for children’s enjoyment, with the South Park Wading Pool nearby.

Children may also enjoy and learn from the Butterfly Garden.

There is also an area designated for butterfly habitat in conjunction with Monarch Watch.

West of Massachusetts Street also has large open areas that are used for public events. This active side of South Park is often filled with visitors and outdoor activities and is the perfect area for a family picnic or to toss around the Frisbee.

South Park is also known for a variety of different trees. An inventory of the trees was developed through the department’s use of Treeworks mapping and ESRI story board was developed. To view the information and take the self-guided tour, please visit: http://arcg.is/1fXeq8.

Events that annually take place in South Park include: Art in the Park, the Parks and Recreation Fall Arts and Crafts Festival and a host of other events.

The amenities of the South Park include:

SHELTERS
There are no shelters located in South Park, but the William Kelly Bandstand (gazebo) is available for rent.

To find out about other shelters available for rental, visit our shelter rentals page. 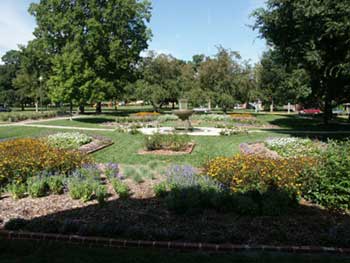